I like sketching. When I use the word I usually mean “oil sketching”, done in oil paint and not intended as a finished painting. Some are done as preparations for paintings, and can evolve over a period of time, with major or minor changes leading towards the basic presentation of an idea, trying out different aspects or forms, without worrying about final appearance.

Some, as here, are drawings done in paint, direct from a model or still life setup. There is no preparation, it’s all invention and excitement. It’s not intended to be exhibited, so one can be as effusive or as plodding as one likes. It can be part of a preparation for a painting or done for practice for it’s own sake. When a model is involved there is also a time limit, in this case three hours.

Starting with fluid paint, the basic divisions of light and shade are made in the main form. the idea will be to keep fluidity and options open for as long as possible. 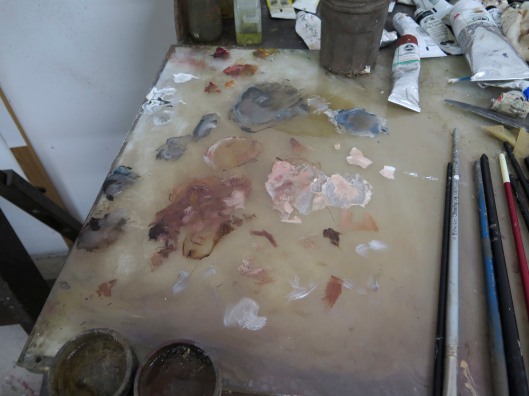 I mix the two main colour areas of the figure so as to have plenty of both and also lighter and darker versions for highlights and deeper shadows when I need them later. You will need to go further but only in small amounts which can be mixed with the brush from the colours on the palette.

With painting, everything is relative so the sooner you get in the main tonal values the better;

This is best done by areas of thin paint into which more opaque colour is applied. The model gets a rest (or a wake up) every three quarters of an hour or so. This is after just over an hour;

Up to now I’ve been using fairly stiff brushes but now I’m switching to softer so as to get more paint on. . Also I’m mostly using the oil on it’s own as a medium to create a better flow. Carrying on until all the main areas have most of the values in place;

With less than an hour left it’s time to start on details and the full range of values;

Mostly about smoothing out the background so it recedes and the figure becomes more prominent, putting in darker values and refining the highlights, and finding a rhythm in the drapery. And then the three hours is up;

The reason it’s a sketch and not a painting (someone is going ask), is that forms, colours and spaces are indicated, not fully realised.